In this post, we will provide a primer on how to model data in Elasticsearch. 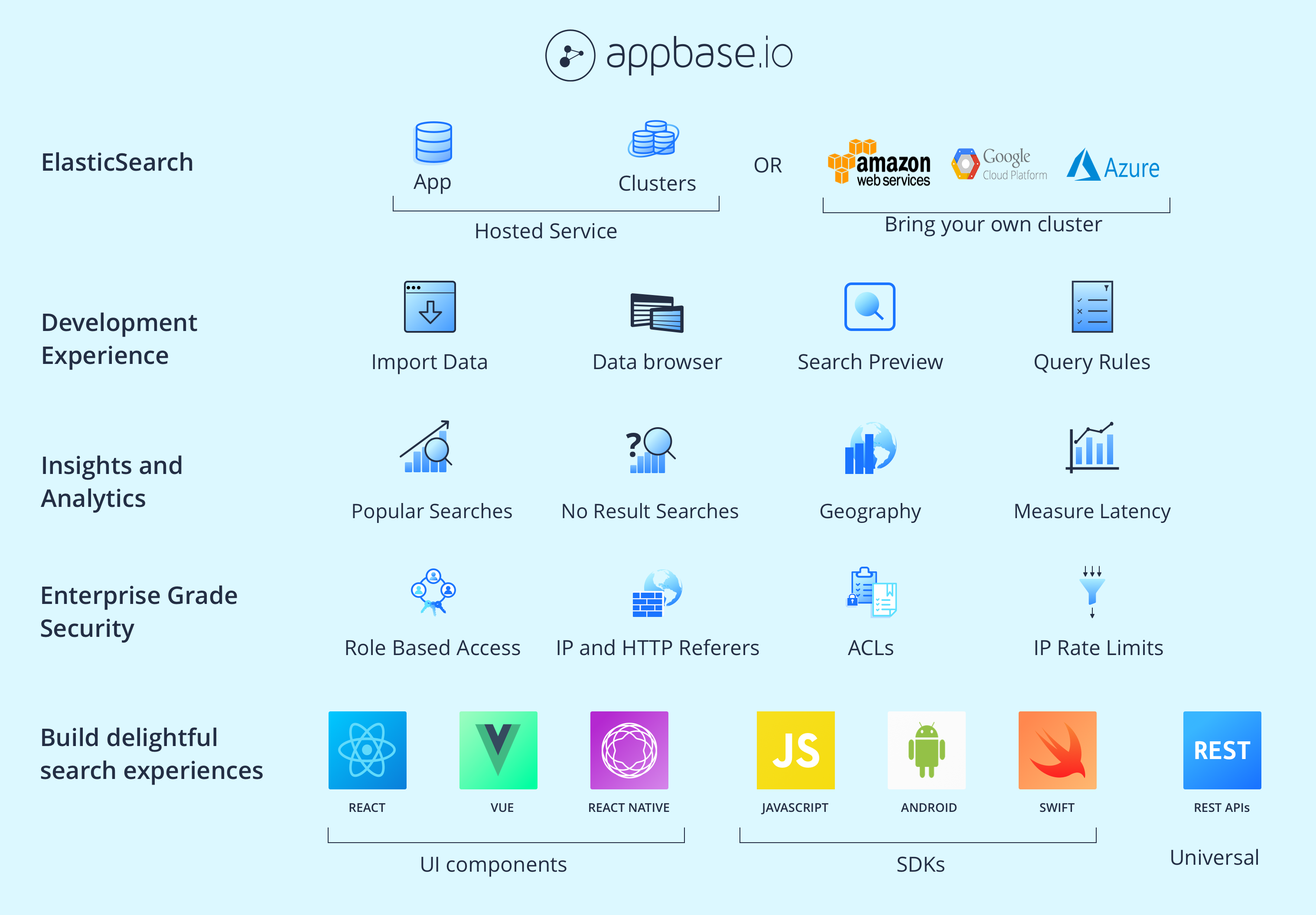 As far as data modeling is concerned, it's Elasticsearch all the way!

An appbase.io cluster is equivalent to an Elasticsearch cluster. You can use appbase.io to:

Elasticsearch is a distributed search and analytics engine built on top of Apache Lucene.

A cluster is composed of apps (aka indexes). An app in appbase.io is equivalent to an index in Elasticsearch.

An app (or index) is an optimized collection of documents that are related to each other.

A document is how the actual data is stored in an app (or index). A document is a JSON object, and can be thought of as an equivalent to a record in SQL.

A document is a collection of fields. Each field has a data type (known as a mapping type) that can either be set at the outset or can be inferred dynamically when a new field gets indexed. Here's an example of a document:

A field that contains analyzed text uses a data structure called an inverted index, which is designed to allow very fast full-text searches. An inverted index (unlike a forward index) creates a map of every unique word to its location within the document(s) the word occurs in as well as its frequency of occurrence across the entire index.

A non-analyzed text field is identified as a keyword type. Numbers, geo points, dates are all non-analyzed. The concept of analysis only applies to a text data type. Non-analyzed data is treated in a very similar way as other databases treat them, and it's used for making exact queries.

During the indexing process, Elasticsearch stores documents and builds an inverted index to make the document data searchable in near real-time. Indexing is initiated with the index API, through which you can add or update a JSON document in a specific index.

Since the notion of analysis is relevant for search engines, a user may wish to index a field as both analyzed and non-analyzed to handle both the use-cases of:

In addition, you may also want to analyze the same field in different ways for better relevance.

Elasticsearch supports creation of multi fields for both of these scenarios.

Appbase.io takes an opinionated approach to handle both search and aggregations scenarios in a universal manner.

When setting the use-case as Search within appbase.io's Schema UI, a field will have the following multi-fields added. This covers all the search scenarios, from handling autosuggestions, partial search, a language specific search to a synonyms driven search.

Once data is indexed, it can be queried using the Elasticsearch Query DSL.

Here's an example of a match query:

This query will return all the documents whose field type contains the value "data".

Elasticsearch uses an imperative Query DSL, like most search engines two. This requires users to learn the process of analysis, setting mappings and the JSON Query DSL of Elasticsearch to be able to effectively leverage Elasticsearch. Further, this typically needs to be exposed over a REST API -- allowing a client to specify Query DSL is a security risk as it allows script injections and DoS scenarios.

Appbase.io offers a declarative Query API for querying Elasticsearch to address these issues - ReactiveSearch API. This same API is used by UI libraries such as ReactiveSearch and Searchbox - which are used by thousands of projects for building their Search UIs.

Whenever possible, we recommend using ReactiveSearch API over Elasticsearch's Query DSL to build search apps with predictable performance that are easier to write and safe by design.